A sphenodontine (Rhynchocephalia) from the Miocene of New Zealand and palaeobiogeography of the tuatara (Sphenodon). 2009. M. Jones et al. Proc. Royal Soc. B. 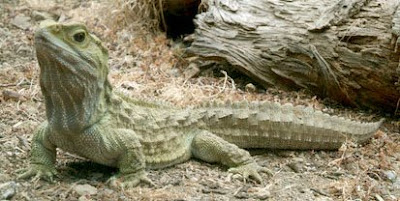 The fossil of a lizard-like New Zealand reptile dating back 18 million years has triggered fresh arguments over whether the continent was fully submerged some 25 million years ago.

Today, the endangered New Zealand tuatara (Sphenodon) is a lizard-like reptile that is the only survivor of a group that was globally widespread at the time of the dinosaurs. The tuatara lives on 35 islands scattered around the coast of New Zealand, mainland populations having become extinct with the arrival of humans and associated animals some 750 years ago.

The oldest known Sphenodon fossil dates to the Pleistocene era (around 34,000 years old), while the new discovery dates to the Early Miocene some 19 to 16 million years ago (Mya).The fossil, of jaws and dentition closely resembling those of the present-day tuatara, bridges a gap of nearly 70 million years in the fossil record of the group between the Late Pleistocene of New Zealand and the Late Cretaceous of Argentina.

"It seems more likely that some local land surface persisted during the drowning of the continent and allowed the ancestors of the tuatara along with some frogs, birds and mammals (known from the Miocene but now extinct) to survive the transgression, although the extent of the remaining land surface at the time is open to speculation. However, even if Zealandia was reduced to only one per cent of today's surface area it would still represent over 2,500 km2, well over 1,000 times the surface area of Stephen's Island (1.5 km2), where over 30,000 tuatara currently live."
Posted by Michael J. Ryan, Ph.D. at 9:19 AM