The Inner Ear of Archaeopteryx 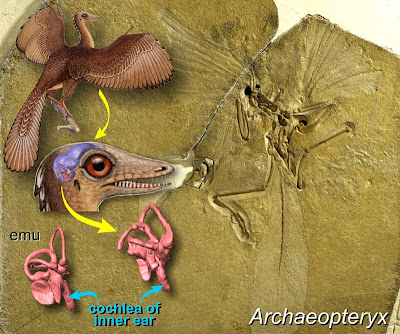 image from the Witmer lab

The earliest known bird, the magpie-sized Archaeopteryx lithographica, was able to hear like a modern emu.

A team of scientists found the length of a part of the inner ear of birds and reptiles could be used to predict their hearing ability. The researchers tested whether the length of the cochlear duct (part of the cochlea - the organ of hearing in animals, which lies in the inner ear) could be used to infer hearing ability in a group of modern birds and reptiles.

Archaeopteryx had an average hearing range of approximately 2,000 Hz. "This means it had similar hearing to modern emus, which have some of the most limited hearing ranges of modern birds."

They found that animals with a long cochlear duct tended to have the best hearing and vocal ability. Modern bird species are known to possess relatively longer cochlear ducts than living reptiles.

A long cochlear duct is also an indicator of an individual's complex vocal communication, living in groups and even habitat choice. This appears to be true for both mammals and birds.

Abstract: Inferences of hearing capabilities and audition-related behaviours in extinct reptiles and birds have previously been based on comparing cochlear duct dimensions with those of living species. However, the relationship between inner-ear bony anatomy and hearing ability or vocalization has never been tested rigorously in extant or fossil taxa. Here, micro-computed tomographic analysis is used to investigate whether simple endosseous cochlear duct (ECD) measurements can be fitted to models of hearing sensitivity, vocalization, sociality and environmental preference in 59 extant reptile and bird species, selected based on their vocalization ability. Length, rostrocaudal/mediolateral width and volume measurements were taken from ECD virtual endocasts and scaled to basicranial length. Multiple regression of these data with measures of hearing sensitivity, vocal complexity, sociality and environmental preference recovered positive correlations between ECD length and hearing range/mean frequency, vocal complexity, the behavioural traits of pair bonding and living in large aggregations, and a negative correlation between ECD length/rostrocaudal width and aquatic environments. No other dimensions correlated with these variables. Our results suggest that ECD length can be used to predict mean hearing frequency and range in fossil taxa, and that this measure may also predict vocal complexity and large group sociality given comprehensive datasets.

Get everything you need to know from co-author Larry Witmer’s lab
Posted by Michael J. Ryan, Ph.D. at 10:08 AM