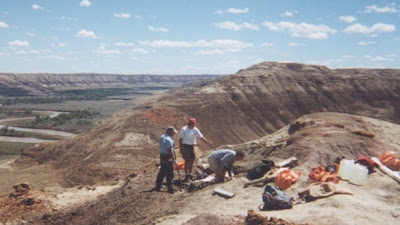 What's wrong with this picture?
Dinosaur Provincial Park in Alberta, Niagara Falls and Lake Superior will be competing with more than 200 spectacular places around the world in the next phase of a competition to name the New 7 Wonders of Nature, organizers said Wednesday.

The three Canadian entrants were among 261 nominees, a list that includes Mount Everest, the Grand Canyon, and Loch Ness.

Over a billion people are expected to join in internet voting to nominate the 77 semifinalists for the top natural wonders. Votes can be cast until July 7, after which a panel of experts will select 21 finalists to be put to another popular vote, which is expected conclude in 2011.

Great news! Too bad the CBC illustrated the article with my photo (above) showing the excavation of Albertaceratops 150 south of DPP.

Thanks to Lisa (Hi Lisa!) for the heads up on this.