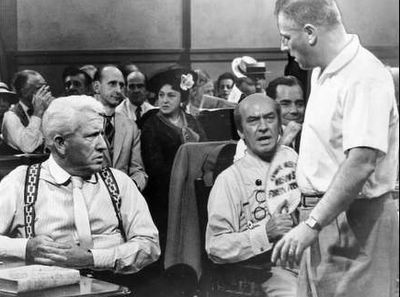 Even though all the names were changed, the 1960 film "Inherit the Wind" was clearly about the real-life Scopes Monkey Trial of 1925, which pitted Darwin's theory of evolution against creationism in court.

Movie Critic Roger Ebert has posted another “great movie” review at his web site, this time covering the classic ‘Inherit the Wind’. Here’s an excerpt:

I wonder if a film made today would have the nerve to question fundamentalism as bluntly as the Tracy character does? The beliefs he argues against have crept back into view as "creationist science," and it was the notion that this should be offered as an alternative to Darwinism that inspired the 2005 Pennsylvania case. In the movie and in the actual Scopes trial, Bryan was a persuasive orator who proudly defended fundamentalism; his 2005 counterparts carefully distanced themselves from religious advocacy and tried to make their case on the basis of "creationist science." Their presentation was so unpersuasive that Judge John E. Jones III (a Republican appointed by George W. Bush) not only ruled against them but added that they exhibited "striking ignorance" and "breathtaking inanity" and "lied outright under oath."

With creationism back in the news recently I’m pleased to be reminded to recommend this classic film about the 1925 ‘Scopes Monkey Trail’. It’s well worth watching and I’d recommend showing’Inherit The Wind’ to students in biology classes at the high school or introductory university level to simulate discussion about this issue that just will not away. Plus it’s a great film.

Fun Film Facts: the ‘Scopes’ character is played by Dick York, the future “Darren Stevens’ on ‘Bewitched', and the presiding judge is played by Harry Morgan of future ‘Dragnet’ and ‘M*A*S*H’ fame.

For photos from the actual trial go to the Smithsonian Institution Archives HERE.

Darrow's expenses were paid by the Baltimore Sun papers, home of the famed journalist H.L. Mencken, who covered the trial with many snorts and guffaws. For those of you who are fond of appending quotes to the bottom of your e-mails you should check out those of Mencken who was a master on par with Wilde.
Posted by Michael J. Ryan, Ph.D. at 9:07 AM