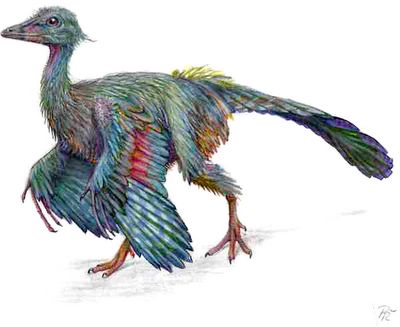 Archaeopteyrx by Pavel Říha from HERE.

Matt Carrano, Thomas R. Holtz Jr., Larry Martin, and Alan Feduccia are amongst those quoted in this Feb. 2 article in the Washington Times about the bird-dinosaur ‘controversy'. You may have to register to read it.

Alan Feduccia, an evolutionary biologist and former chairman of the Biology Department at the University of North Carolina, does not believe the structures found on the Chinese fossils are feathers. He contends in his paper "Do Feathered Dinosaurs Exist? Testing the Hypothesis on Neontological and Paleontological Evidence" that the structures found in these dinosaurs are collagen fibers, which are proteins that often form the connective tissues of animals. "I would contend that there's no such thing as feathered dinosaurs," Mr. Feduccia says. "They have a feathery appearance, but have nothing to do with feathers."