In addition to the work of Dr. Peggy Ostrom previously reported on the Palaeoblog, MNSBC.com summarizes some of the other dinosaur( =T. rex) presentations at last week's AAAS annual meeting: 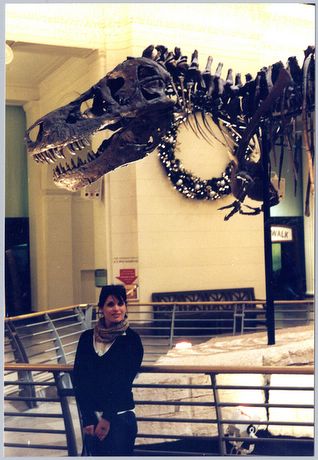 Jack Horner: The bones of maturing tyrannosaurs appear to follow a pattern much more similar to those of birds rather than crocodiles, strengthening the link between the extinct species and present-day birds. Paleontologist Jack Horner of the Museum of the Rockies in Bozeman, Mont., said the evidence can be seen by slicing T. rex bones into thin cross-sections, then analyzing the spaces that were once taken up by blood vessels. "The blood that went through the dinosaur bones is equal to or higher than what went through bird bones," Horner said. In contrast, modern-day crocodilians have much lower blood flow.

Larry Witmer: T. rex appears to have had sensory systems that were "even more heightened than we thought," said Ohio University paleontologist Lawrence Witmer. That's based on CT scans of fossilized dinosaur skulls that can indicate the size of areas devoted to particular tasks. Such an analysis indicates that T. rex had "an inner ear structure consistent with a dynamic lifestyle involving rapid tracking movements of the eyes and head," Witmer said. Based on brain size, the senses of smell, sight, hearing and balance were also relatively well-developed.

Witmer & Horner: T. rex was not particularly agile — even though it's portrayed that way in "Jurassic Park" and other dinosaur movies. Based on the biomechanical evidence, Witmer and Horner agreed that T. rex couldn't jump or run in the sense of having both feet off the ground at once. "We have an animal that looks like it should be agile, but isn't. ... I don't think T. rex could dance," Horner said.

Although there are still plenty of mysteries to be settled about T. rex and its extinct kin, Witmer marveled at how much progress has been made already in figuring out how dinosaurs lived. A decade ago, "nobody would be even asking the kinds of questions that Jack and I are asking," he said. Now, he said, "we're starting to answer them."
Posted by Michael J. Ryan, Ph.D. at 1:27 PM