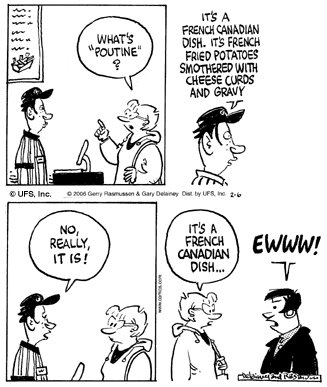 The Society of Vertebrate Paleontology conference will be in my home town of Ottawa, Ontario later this year. As the date approaches I’ll have recommendations to give you on places to see, places to eat, and various other aspects of the city. But for now I couldn’t pass up the opportunity to post the above cartoon that comments on possibly Canada’s only unique culinary delight, poutine. Yes, it really does exist and will render you comatose by the time you’ve finished the plate – be sure to ask for extra gravy!

The cartoon posted above is from ‘Betty’ one of the better nationally syndicated strips, created and drawn by two Canadians, Gary Delainey and Gerry Rasmussen living in Edmonton the last time I checked. And there is even a palaeo-connection. The strip started out as “Bub Slug: Waterfall Repairman” in the University of Alberta’s (now home to Phil Currie and Eva Koppelhus) student newspaper, The Gateway, before graduating to running as a full page colour strip once a week in the Edmonton Journal. Sometime after that the strip was reworked for international success and Bub’s wife Betty took over the strips' title. As far as I know only John (The Nature Nut) Acorn – radio host of the ‘Deep Alberta’ show for the Royal Tyrrell Museum of Palaeontology on CKUA --has a full archived run of all of the pre-Betty strips, all of which I mean to scan one day.

And Edmonton really does have an artificial waterfall which apparently costs a cool one million dollars every time they turn it on.
Posted by Michael J. Ryan, Ph.D. at 8:51 AM