A "lost" science manuscript from the 1600s found in a cupboard in a house during a routine valuation is expected to fetch more than £1m at auction.

The hand-written document - penned by Dr Robert Hooke - contains the minutes of the Royal Society from 1661 to 1682, experts said. It was found in a house in Hampshire, where it is thought to have lain hidden in a cupboard for about 50 years.

Dr Robert Hooke, who died in 1703, has been described as the unsung hero of science and "England's Leonardo". As one of the original Fellows of the Royal Society, Dr Hooke recorded hundreds of inventions, 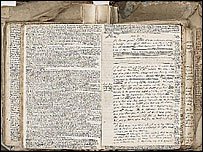 demonstrations and experiments by leading scientists, but his name is often forgotten. He published the world's first comprehensive illustrated book on microscopy and coined the word "cell".

He pioneered the modern watch, designed scientific instruments and devices, as well as the sash window, the velocipede, and the universal joint used in motorized vehicles. He also helped pave the way for the steam engine and, with Sir Christopher Wren, was responsible for rebuilding London after the Great Fire of 1666.