Tomorrow is Darwin’s Birthday so Defenders of Darwin's theory of natural selection are planning hundreds of events around the world Sunday, the 197th anniversary of his birth, saying recent challenges to the teaching of evolution have re-emphasized the need to promote his work. 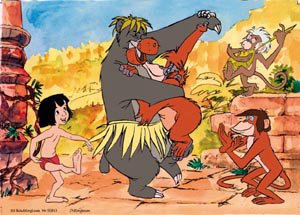 "The people who believe in evolution ... really just sort of need to stand up and be counted,'' said Richard Leventhal, director of the University of Pennsylvania's Museum of Archaeology and the museum's celebration will include birthday cake, a little badminton (reportedly a favorite game of Darwin's) and a reading of his "The Origin of Species" by student Bill Wames, who volunteered to dress up as the 19th-century naturalist.

"Come to my party!" Wames, in costume, bellowed Wednesday while handing out fliers around campus. "Sunday at one o'clock!"

At the University of Victoria in British Columbia, Canada, philosophy students will got a jump-start on Darwin Day on campus Friday by singing Darwin carols they composed.
Posted by Michael J. Ryan, Ph.D. at 5:00 PM