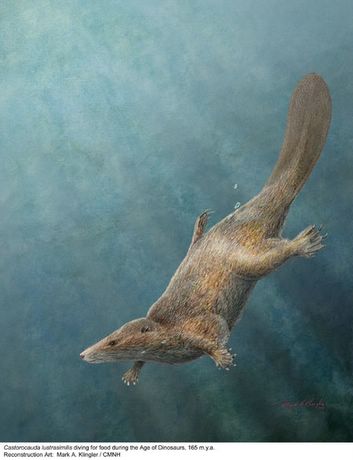 Illo of Castorocauda lutrasimilis. The artwork of the reconstructed animal is 50 percent of actual fossil size. Credit: Mark A. Klingler/CMNH

Abstract: A docodontan mammaliaform from the Middle Jurassic of China possesses swimming and burrowing skeletal adaptations and some dental features for aquatic feeding. It is the most primitive taxon in the mammalian lineage known to have fur and has a broad, flattened, partly scaly tail analogous to that of modern beavers. We infer that docodontans were semiaquatic, convergent to the modern platypus and many Cenozoic placentals. This fossil demonstrates that some mammaliaforms, or proximal relatives to modern mammals, developed diverse locomotory and feeding adaptations and were ecomorphologically different from the majority of generalized small terrestrial Mesozoic mammalian insectivores.

From the article at Nature.com news by Michael Hopkin:

Castorocauda lutrasimilis (meaning beaver-tailed and otter-like) was found by palaeontologists trawling the collections of the Jinzhou Museum of Palaeontology in China.

Like today's river otter, C. lutrasimilis probably lived in a burrow and hunted fish. And, a bit like a modern beaver, it sported a broad, flat, scaly tail. At almost half a metre long, the animal is the biggest-known mammal-like creature of its time, and shows a hitherto unsuspected diversity in the shapes and sizes of the earliest mammals.

The discovery shows that early mammals and their relatives were experimenting with different lifestyles from the start, rather than waiting for the decline of the dinosaurs before diversifying. 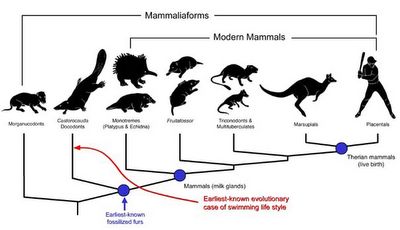