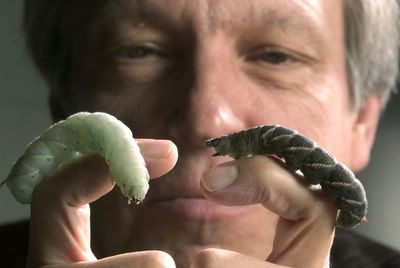 Abstract: Polyphenisms are adaptations in which a genome is associated with discrete alternative phenotypes in different environments. Little is known about the mechanism by which polyphenisms originate. We show that a mutation in the juvenile hormone-regulatory pathway in Manduca sexta enables heat stress to reveal a hidden reaction norm of larval coloration. Selection for increased color change in response to heat stress resulted in the evolution of a larval color polyphenism and a corresponding change in hormonal titers through genetic accommodation. Evidently, mechanisms that regulate developmental hormones can mask genetic variation and act as evolutionary capacitors, facilitating the origin of novel adaptive phenotypes.

Biologists have evolved a complex trait in the laboratory using the pressure of selection to induce tobacco hornworms to evolve the dual trait of turning black or green depending on the temperature during their development.

Their experiments, they said, offer important insight into how complex traits involving many genes can abruptly "blossom" in an organism's evolution.

The complex traits, or "polyphenisms," they studied are instances in which animals with the same genetic makeup can produce quite different traits, or phenotypes, in different environments. While biologists have understood the basic machinery underlying polyphenisms, the mystery remained how such complex traits, which involve mutations in multiple genes, could evolve and persist.

In their experiments, Suzuki and Nijhout chose a species of finger-sized tobacco hornworm, Manduca sexta, which normally produces only green larvae. Because a related species, Manduca quinquemaculata, develops black or green larvae when exposed to lower or higher temperatures, the researchers theorized that they could use temperature shocks to evolve a similar polyphenism in M. sexta.

After rearing and selecting ten generations of caterpillars, with about 300 caterpillars per generation, the researchers found that they had, indeed, created the two distinct strains. The polyphenic strain would develop a green color at higher temperatures, altering abruptly at a temperature of about 28 degrees C. In contrast, the monophenic strain remained black at all temperatures.

According to Nijhout, the generation of polyphenism in the caterpillar demonstrates an evolutionary phenomenon called "genetic accommodation." In this process, a mutation in a regulatory pathway such as a hormonal pathway changes the hormonal level to bring it closer to a threshold level that could be affected by environmental variation.
Posted by Michael J. Ryan, Ph.D. at 9:30 AM