The Evolution of Shark ‘ESP’

From the U of Florida press release:

Researchers have traced the uncanny ability of sharks to detect electrical signals while hunting and navigating to the same type of embryonic cells that gives rise to many head and facial features in humans.

The discovery identifies neural crest cells, which are common in vertebrate development, as a source of sharks' electrical ESP. It also fortifies the idea that before our early ancestors emerged from the sea, they too had the ability to detect electric fields. 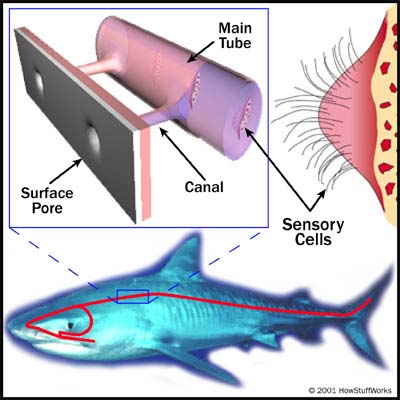 How the lateral line works from HERE

"If you think of this in the big picture of evolution of sensory systems, such as olfaction, hearing, vision and touch, this shows sharks took a pre-existing genetic program and used it to build yet another type of sensory system," Cohn said. The process mirrors the development of the lateral line that allows fish to mechanically sense their environment, and organs of the inner ear that enable people to keep their balance. But scientists suspect as human ancestors emerged from the sea, they discarded their lateral lines as well as their ability to sense electrical fields.

"Our fishy ancestors had the anatomy for it," said James Albert, a former UF biologist who is now at the University of Louisiana. "You can imagine how valuable this system would be if you were aquatic, because water is so conductive. But it doesn't work on land - air doesn't conduct electricity as well. When it happens, it's called a lightning bolt and you don't need special receptors to sense it."