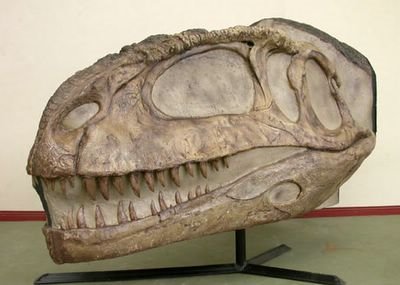 Photo of cast of Mapusaurus by Rodolfo Coria

The new species, named Mapusaurus roseae, is possibly even larger than its close relative Giganotosaurus, which in 1995 took T. rex's crown as the world's biggest known carnivorous dinosaur. While more than matching T. rex for size, Mapusaurus appears to have been a sleeker, more agile predator, with teeth designed for slicing flesh rather than crushing bones.

At least seven of the animals were uncovered together in a mass fossil graveyard in western Patagonia, a region famous for giant-dinosaur remains. Living some 100 million years ago, the largest specimen was more than 12.5 meters long. The find is also one of the first to suggest giant meat-eating dinosaurs lived in groups. "The burial is formed 100 percent by Mapusaurus bones," he added. "The chances they had been deposited randomly are extremely low."

Coria and Currie say Mapusaurus might have hunted the greatest dinosaur of all: a 102-metric-ton, 38-meter-long plant-eater named Argentinosaurus.

Rodolfo Coria, professor at the Carmen Funes Museum in Plaza Huincul, Argentina, found the fossils in the foothills of the Andes mountains.

Coria and fellow paleontologist Philip Currie of the University of Alberta in Canada describe the find in the latest issue of the journal Geodiversitas.
Posted by Michael J. Ryan, Ph.D. at 4:22 PM