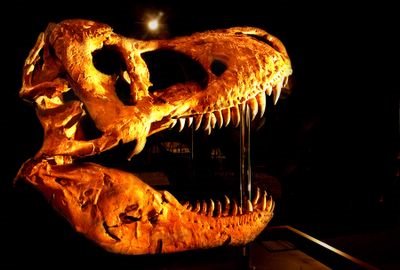 The world's largest Tyrannosaurus rex skull, unearthed nearly 40 years ago in eastern Montana, is now on display at the Museum of the Rockies at Montana State University in Bozeman.

The skull measures measures 59 inches long from its snout to the back of its skull. By the same standard, the Field's Sue is a close runner-up at 55.4 inches long according to Jack Horner, the Museum's curator of paleontology.

Skull fragments from the specimen, known as MOR 008, were found in the Hell Creek Formation near Billings in the late 1960s and collected by Bill McMannis, an MSU geologist. Museum preparator Carrie Ancell began their reconstruction in the late 1980s, and preparator Michael Holland finished the job this year.

A single vertebra is the only other piece of MOR 008 that has been found besides the skull.

"We are going to try and figure out how old the animal was when it died by using histology, the study of the microscopic structure of fossil remains," Horner said. "The specimen contains several characteristics that suggest this individual was mature, and perhaps quite old when it died."

MOR 008 is one of three T-rex skulls in the Museum of the Rockies collection, all of which are on display in the Hall of Horns and Teeth. All of them were found in Montana. The Museum has part of twelve T-rexes, more than any other institution in the world.
Posted by Michael J. Ryan, Ph.D. at 10:13 AM