Abstract: So far, the Palaeozoic fossil jawless vertebrates have not provided any direct evidence for the organization of the gills, apart from vague impressions—supposedly left by gill filaments—on the bony surface of the gill chamber in certain armoured forms or 'ostracoderms' (for example, osteostracans and heterostracans). The latter are currently regarded as more closely related to the living jawed vertebrates (crown gnathostomes) than to the living jawless vertebrates (hagfish and lampreys, or cyclostomes). Here we report the first direct evidence for the position of the gill filaments (left) — possibly supported by gill rays—enclosed by gill pouches in a 370-million year (Myr)-old jawless vertebrate, 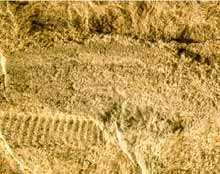 This extinct jawless fish has much the same gill organization as living lampreys, although it possesses an unusually large number of gill pouches—a condition unlike that in any extant vertebrates and that raises questions about gill development. Endeiolepis is currently regarded as a close relative of anaspids, a group of 410–430-Myr-old 'ostracoderms'. Assuming that current vertebrate phylogeny is correct, this discovery demonstrates that pouches enclosing the gills are primitive for vertebrates, but have been subsequently lost in jawed vertebrates.