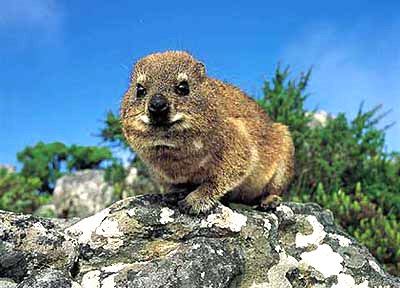 Paleontologists at the Duke Lemur Center have assembled a new picture of a 35-million-year-old fossil mammal, Thyrohyrax, a prehistoric hyrax -- and they even have added a hint of sound.

By painstakingly measuring hundreds of specimens fossils of Thyrohyrax, recovered from the famous fossil beds of Egypt's Fayum Province, the researchers determined that males of this now-extinct species -- and only males -- had oversized, swollen lower jaws shaped much like a banana. Further, the team speculated, the animals may have used the balloon-like structural chamber that shaped their bizarre jaws to produce sound.

If this speculation is correct, Thryohyrax and its fossil relatives would be the only mammals found so far to use such a skeletal structure for producing sound, the researchers said. They added that some dinosaurs are thought to have used similar sound-producing mechanisms.

According to Simons, today's hyraxes are relics of a time when Africa lacked most of the kinds of animals found there today. Current scientific thought holds that most modern mammal groups diversified and became larger only after a giant asteroid killed off the dinosaurs 65 million years ago.

The researchers published their findings in the March issue of the Journal of Vertebrate Paleontology, which was released in mid-April.
Posted by Michael J. Ryan, Ph.D. at 2:21 PM