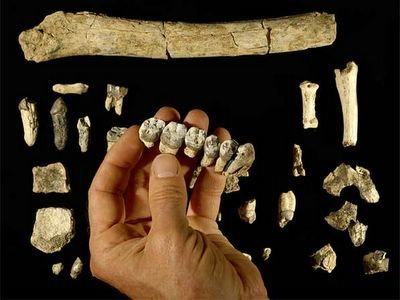 Abstract: The origin of Australopithecus, the genus widely interpreted as ancestral to Homo, is a central problem in human evolutionary studies. Australopithecus species differ markedly from extant African apes and candidate ancestral hominids such as Ardipithecus, Orrorin and Sahelanthropus. The earliest described Australopithecus species is Au. anamensis, the probable chronospecies ancestor of Au. afarensis. Here we describe newly discovered fossils from the Middle Awash study area that extend the known Au. anamensis range into northeastern Ethiopia. The new fossils are from chronometrically controlled stratigraphic sequences and date to about 4.1–4.2 million years ago. They include diagnostic craniodental remains, the largest hominid canine yet recovered, and the earliest Australopithecus femur. These new fossils are sampled from a woodland context. Temporal and anatomical intermediacy between Ar. ramidus and Au. afarensis suggest a relatively rapid shift from Ardipithecus to Australopithecus in this region of Africa, involving either replacement or accelerated phyletic evolution.

From the UC – Berkeley press release:

New fossils discovered in the Afar desert of eastern Ethiopia are a missing link between our ape-man ancestors some 3.5 million years ago and more primitive hominids a million years older.

The fossils are from the most primitive species of Australopithecus, known as Au. anamensis, and date from about 4.1 million years ago, said Tim White, one of the team's leaders. The hominid Australopithecus has often been called an ape-man because, though short-statured, small-brained and big-toothed, it walked on two legs unlike the great apes.

More primitive hominids in the genus Ardipithecus date from between 4.4 million and 7 million years ago and were much more ape-like, though they, too, walked on two legs.

"This new discovery closes the gap between the fully blown Australopithecines and earlier forms we call Ardipithecus," White said. "We now know where Australopithecus came from before 4 million years ago."

"It is fair to say that some species of Ardipithecus gave rise to Australopithecus," he said.

In all, teeth and jawbones of eight individuals were found at Asa Issie, all from about 4.1 million years ago as dated by paleomagnetic and argon-argon methods. A partial thigh bone and hand and foot bones were very similar to the Lucy bones found 60 kilometers away in Hadar and dating from 3 million to 3.4 million years ago. The large, thick-enameled teeth were judged by the research team to be closest to Au. anamensis, and ancestral to Au. afarensis.

Congradulations to the CMNH's Dr. Yohannes Haile-Selassie who is a co-author on the paper.