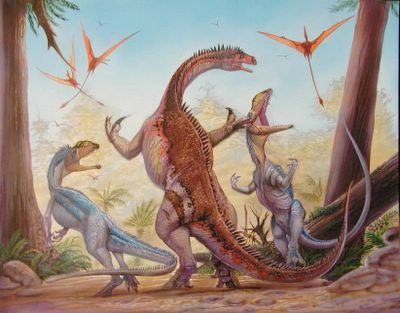 From the Research Council of Norway via Biology News.net:

While most nations excavate their skeletons using a toothbrush, the Norwegians found one using a drill. The somewhat rough uncovering of Norway's first dinosaur happened in the North Sea, at an entire 2256 metres below the seabed. It had been there for nearly 200 million years, ever since the time the North Sea wasn't a sea at all, but an enormous alluvial plane.

It is merely a coincidence that the remains of the old dinosaur now see the light of day again, or more precisely, parts of the dinosaur. The fossil is in fact just a crushed knucklebone in a drilling core – a long cylinder of rock drilled out from an exploration well at the Snorre offshore field.

Norway's first dinosaur fossil is a Plateosaurus, a species that could be up to nine metres long and weigh up to four tons. It lived in Europe and on Greenland 210 to 195 million years ago, at the end of the Triassic Period.

The Plateosaurus at the Snorre offshore field had a hollow grave. The fossil, which was found 2256 metres below the seabed, represents the world's deepest dinosaur finding. But it is by no means certain that the record-breaking knucklebone is a rarity down there in the abyss.

In fact, the old North Sea land was once a huge area where big rivers meandered through dry plains. Now the landscape has been compressed to form a pattern of fossil alluvial sand between banks of red shale.

The work was lead by the palaeoblogger’s friend Dr. Jørn Hurum.

Thanks to Chad of the Digital Dream Machine Blog for pointing this out to me.
Posted by Michael J. Ryan, Ph.D. at 10:18 AM