Aggressive behaviour affects selection on morphology by influencing settlement patterns in a passerine bird. 2006. Renée A. Duckworth. Proceedings of the Royal Academy B. Early on-line publication. 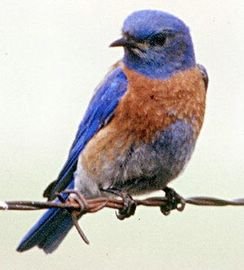 This study suggests the birds may play more active roles in their own natural selection than traditional models of evolution would support.

"The traditional view of evolution is that organisms are passive creatures on which natural selection operates," said Duckworth. "[but] by selecting the environment in which they live, animals can actively affect the natural selection they experience," Duckworth said.

“The main message of this study is that the ability of organisms to choose their environment needs to be made a more explicit part of evolutionary theory."

Read the rest of the article HERE.
Western Bluebird from HERE
Posted by Michael J. Ryan, Ph.D. at 2:04 PM