From Aftenpolten.no. in Norway comes this article:

A Norwegian professor has studied the eyesight of a 400 million-year-old fossil trilobite and found that the extinct marine creature had three-dimensional vision. 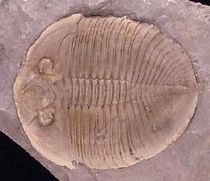 Professor David L. Bruton at the Museum of Natural History at the University of Oslo unearthed thousands of fossil trilobites in a field outside of Bonn in Germany several years ago. With a German colleague, he set about studied their vision and used the 50 best specimens to carry out an examination of their eyes and how their vision functioned. Bruton and his colleague are the first to discover what lay behind the lens of the trilobite eye - in this case, a space where the optic nerves were attached.

"This has never been seen before - the path of the nerve filaments was 500 micrometers," Bruton told Apollon, the University of Oslo research magazine. Only one of their specimens was well enough preserved to display these tiny nerve traces. "We can now state that the eye is an extremely ancient structure and that individual trilobites had eyes that worked on exactly the same principle in today's insects," Bruton said.

The trilobite appeared roughly 540 million years ago and was a dominant life form in the shallow seas of the Cambrian period, with their hard and movable shells.

For those of you who read Norwegian go HERE.
Image from HERE.
Posted by Michael J. Ryan, Ph.D. at 12:59 PM