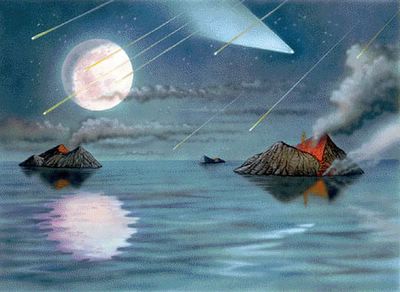 Research funded partly by NASA has confirmed the existence of liquid water on the Earth's surface more than 4 billion years ago.
Scientists have found that the Earth had formed patterns of crust formation, erosion and sediment recycling as early as 4.35 billion years ago. Their findings came during a study of zircon crystals formed during the earliest period of Earth's history, the Hadean Eon (4.5 billion to 4.0 billion years ago).

"NASA is interested in how early the Earth had abundant liquid water. If oceans form early in a planet's history, then so can life," said Carl Pilcher, senior scientist for astrobiology at NASA Headquarters, Washington. "Learning how early oceans formed on Earth will help us understand where else oceans and perhaps even life may have formed in this solar system and in planetary systems around other stars."

"This work provides direct evidence that the Earth was probably habitable within a hundred million years of its formation," said Bruce Runnegar, director of the NASA Astrobiology Institute (NAI) at NASA Ames Research Center, Moffett Field, Calif., which provided some of the study's funding.