"This is one of the first cases in vertebrates where it's been possible to track down the genetic mechanism that controls a dramatic change in skeletal pattern, a change that occurs naturally in the wild." David M. Kingsley 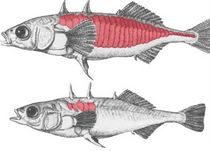 Wild populations of stickleback fish have evolved major changes in bony armor styles (shaded) in marine and freshwater environments. New research shows that this evolutionary shift occurs over and over again by increasing the frequency of a rare genetic variant in a single gene. (Image: David Kingsley, HHMI at Stanford University, modified from Cuvier (1829))

Even though the above article is a few months old now, I'm posting the link to it and its press release (below) because the research presented is an elegant example of how major evolutionary character changes can be simply explained. Read it and enjoy.

In a stunning example of evolution at work, scientists have now found that changes in a single gene can produce major changes in the skeletal armor of fish living in the wild.

"Our motivation is to try to understand how new animal types evolve in nature," said molecular geneticist David M. Kingsley, a Howard Hughes Medical Institute investigator at the Stanford University School of Medicine. "People have been interested in whether a few genes are involved, or whether changes in many different genes are required to produce major changes in wild populations."

The answer, based on new research, is that evolution can occur quickly, with just a few genes changing slightly, allowing newcomers to adapt and populate new and different environments.

In collaboration with zoologist Dolph Schluter, at the University of British Columbia, Vancouver, Canada, and Rick Myers and colleagues at Stanford, Kingsley and graduate student Pamela F. Colosimo focused on a well-studied little fish called the stickleback. The fish -- with three bony spines poking up from their backs -- live both in the seas and in coastal fresh water habitats all around the northern hemisphere .