Sauropod dinosaurs are one of the most conspicuous groups of Mesozoic terrestrial vertebrates. They show general trends towards an overall increase in size and elongation of the neck, by means of considerable elongation of the length of individual vertebrae and a cervical vertebra count that, in some cases, increases to 19. The long neck is a particular hallmark of sauropod dinosaurs and is usually regarded as a key feeding adaptation. Here we describe a new dicraeosaurid sauropod, from the latest Jurassic period of Patagonia, that has a particularly short neck. With a neck that is about 40% shorter than in other known dicraeosaurs, this taxon demonstrates a trend opposite to that seen in most sauropods and indicates that the ecology of dicraeosaurids might have differed considerably from that of other sauropods. The new taxon indicates that there was a rapid radiation and dispersal of dicraeosaurids in the Late Jurassic of the Southern Hemisphere, after the separation of Gondwana from the northern continents by the late Middle Jurassic. 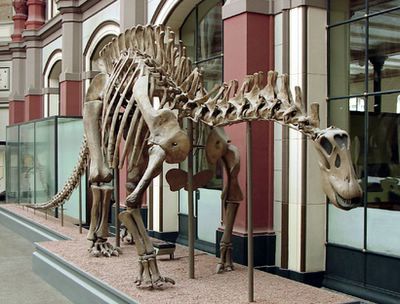 Photo of Dicraeosaurus from HERE.

A fossil has recently been discovered of this short-necked dinosaur that lived in Patagonia, Argentina, about 150 million years ago, during the Late Jurassic period. Brachytrachelopan mesa is a member of the sauropod group of dinosaurs, which includes the 30-metre-long giant Diplodocus.

Sauropods typically had long necks, which is thought to have allowed them to reach high into trees to maximize their food intake. But the fossil of B. mesai shows that it measured less than 10 metres, even after reaching adulthood

A long neck is an unnecessary and energetically expensive asset for a creature if food is readily available on the ground, and this could explain the existence of B. mesai, says Oliver Rauhut of the Bavarian State Collection for Palaeontology and Geology in Munich, Germany. "Nature tends to eliminate structures that are not needed for that reason," he explains.

Paul Barrett, a palaeontologist at the Natural History Museum in London, points out that Patagonia lacked bird-footed dinosaurs called ornithopods, which grazed the Jurassic plains of other continents. This means that B. mesai might have faced little competition for resources.

This particular fossil also provides exciting clues about the evolution of sauropods, the team says. The short-necked dinosaur's closest relative comes from Africa. Brachytrachelopan mesai bears less similarity to more recently evolved sauropods in South America, and even weaker resemblance to those in Northern continents.

All of this hints that it evolved swiftly in the middle Jurassic period, after the separation of continents of the Southern and Northern Hemispheres but before Africa and South America fully broke apart. "It looks like this is a dinosaur that's trying to reinvent itself," says Barrett. "This fossil is telling us a lot about how these ecosystems evolved."