Have Dinosaur, Will Draw 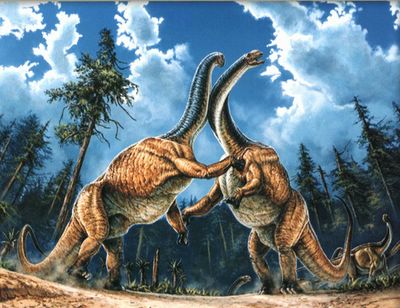 Michael Skrepnick is a veteran illustrator of dinosaurs and other prehistoric art. His paintings and black & white reconstructions have graced the covers of most preeminent scientific journals, been featured in National Geographic, and can be seen in many of the premier museums in North America. Most recently Michael’s image of Falcarius was used to announce the discovery of this new theropod. Michael lives and works just south of Calgary, Alberta, and I’ve been lucky enough to work with him on a few of my projects.

This article by Dennis O’Brien in the Baltimore Sun discusses how artists and scientists work together to reconstruct dinosaurs:

Skrepnick, whose image of a snarling Falcarius (left) appeared in newspapers and magazines across the country, is more of a dinosaur specialist. He's been drawing the ancient beasts since he began working as a volunteer at the Royal Tyrrell Museum of Palaeontology in Drumheller in 1985. His work has also appeared in National Geographic and at the Field Museum in Chicago.

In the case of Falcarius, the illustrator was lucky: Researchers had 90 percent of the creatures' bones. All too often, paleontologists and their artist collaborators have only fragmentary evidence to go by.

"The more you have to work with, the better off you are," Skrepnick said. "I feel like I'm acting as a representative of the dinosaur because it can't speak for itself."

Michael has also written and/or illustrated a number of excellent dinosaur books, such as THIS ONE. Most of them are available through your local bookshop or on-line dealer.

Illustration of Falcarius © Nature
Posted by Michael J. Ryan, Ph.D. at 11:44 AM