South America has the most biodiversity of any major region today and according to an international team of researchers, that biodiversity began at least 52 million years ago. 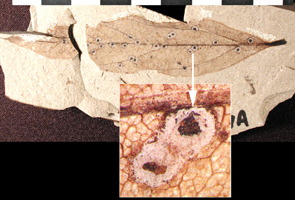 Dr. Peter Wilf and his colleagues looked at plant diversity and insect feeding richness on fossil plants and compared fossil leaves collected at Laguna del Hunco, Patagonia, Argentina, that date to the globally warm Eocene, with fossil leaves collected at three Eocene sites in North America – Republic, Washington; Green River, Utah; and Sourdough, Wyoming. The researchers looked at the types and amounts of insect consumption on the fossilized leaves at all four locations.

"All four floras are very rich in fossil plant species and the Laguna del Hunco flora is the most diverse of the group," Wilf says. They report in the online version of the Proceedings of the National Academy of Sciences that by 52 million years ago, plants and insects in Patagonia were more diverse and abundant than those at that time in North America.

"We still do not know when Patagonia became that diverse," says Wilf. "We have to go back in time some more to find the beginning of increased diversity."

"Insect damage on leaves, the remains of insect meals, is uniquely valuable data," says Wilf. "While actual insect fossils can give us taxonomic information, leaf damage provides unique ecological data about which and how many kinds of insects were eating and interacting with ancient plant species in the deep past. Also, insect damage on fossil plants, which can be very abundant, can give us a great deal of information about insects at times and places with very few insect fossils."