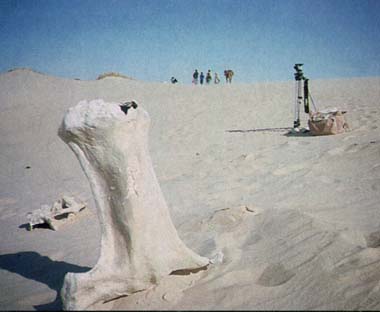 In 1995, Dr. David West Reynolds and I traveled (in the early days of The Phaeton Group) to Tunisia to investigate both the Roman ruins and the palaeontological resources that the country has. Along the way we relocated all the locations used in the filming of the first Star Wars movie (now episode IV). This is a photograph I took of the remains of a fibreglass replica of a sauropod we found that had been used for the skeleton of a ‘krayt dragon’ and then abandoned in the desert after filming was over. That's Reynolds and some of the Berber kids who were helping to guide us in the distance.

Once news of our trip got out it eventually spawned a small "SW movie tourism" business that traveled across Tunisia in our footsteps. The few props that we had found and left behind have now all been scavenged and probably sold on Ebay.

We also found the "Tunis Dig" locality from "Raiders of the Lost Ark". Although there was almost nothing left behind from the filming, I did pick up and keep a fragment of old plaster and burlap with the impression of few glyphs still visible on it. Many years later I learned that this is actually a portion of top of the slab (unseen in the movie) used to seal Indy in the Well of Souls. Maybe I'll post a picture of this one of these days.
Posted by Michael J. Ryan, Ph.D. at 7:18 PM