Tale Out Of Time

“In the misty reaches of the prehistoric past – in the days before the fall of the great lizards – there lived a creature, the likes of which the world had never seen. In his time, he strode through the Valley of Flame like a giant, red-scaled demon – his only companion, a young Dawn-man called Moon-Boy…Stan Lee presents: A TEMPEST-TOSSED TALE OUT OF TIME!” 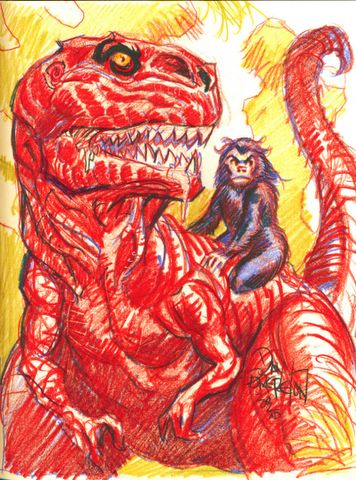 The above drawing of Jack Kirby’s “Devil Dinosaur” is by the Palaeoblog’s good friend, Dan Brereton. Although he doesn’t draw a lot of dinosaurs, he does specialize in dark and creepy Halloween-inspired characters like his own Nocturnals. I got to know Dan when I helped him kick around some scientific concepts for his book ”Gaintkiller” a few years back.

For more info on the Devil Dinosaur go over to the Kirby Comics Blog.