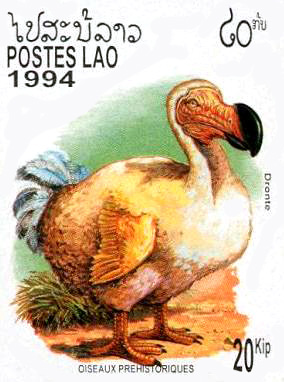 The discovery of isolated dodo bones, Raphus cucullatus (L.) in high perched shelters strongly suggests that the bird's extinction was intimately linked with human predation. The dodo was a lowland bird and could not have had access to high level cliffs. Previously, paleontological remains of the dodo had been collected in the lowlands of Mauritius, which is in agreement with its terrestrial habits. The presence of fugitive slaves and convicts from early 17th century Dutch period may have been responsible for the rapid elimination of the species. This probably represents the first concrete evidence of dodo predation to be associated with direct human activity. Alternatively other dodo bones were found in the lava tunnel system in northeast of the island and are relics due to natural death. The familial status of the raphids is no longer valid in view of recent morphological and molecular phylogenetic analyses, and consequently the genus Raphus is included in the family Columbidae.