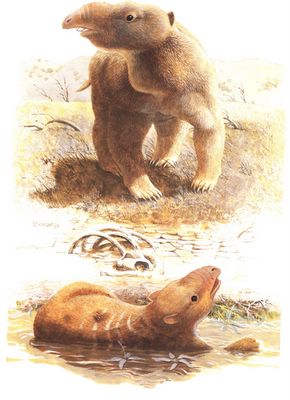 Bones suggest that early humans did not ruthlessly wipe out huge beasts.

From the article by Michael Hopkins at News@nature.com:

An Australian research group may ease humanity's collective conscience over a spate of prehistoric extinctions on the southern continent. The die-off, they say, was not the rapacious work of newly arrived humans, but was due rather to changing climate.

Australia's large prehistoric animals, called megafauna, were as bizarre as anything that lives there today. King of them all was the marsupial lion, a 130-kilogram meat-eater who lived alongside giant kangaroos, huge lizards called goannas, and Diprotodon (above), which resembled a three-tonne wombat.

After the arrival of humans on the continent, at least 45,000 years ago, these weird and wonderful creatures began to die out. Experts blamed the colonizers, arguing that they launched a hunting 'blitzkrieg' that wiped out the megafauna within a few generations.

But the animals may have survived for a lot longer than people thought, argues Judith Field of the University of Sydney, who has analysed fossil remains. Her excavations seem to show that man and beast lived side by side for as long as 15,000 years.

She suspects that as Australia approached the most recent ice age, the growing cold and aridity turned much of the continent into a place where these large animals simply could not survive. Although man probably did hunt the large animals, the fact that they survived for so long argues against the blitzkrieg model, she adds.

Read the full article HERE. Image from HERE.
Posted by Michael J. Ryan, Ph.D. at 7:05 AM