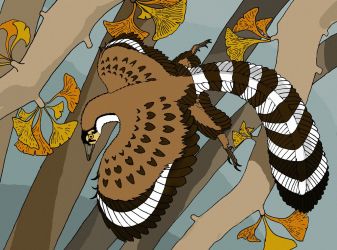 From the Quirks & Quarks web page:

When Archaeopteryx was first discovered, it quickly became one of the most important fossils ever found. With the skeleton of a dinosaur and the feathers of a bird, it provided the first solid link between the two groups of animals. Today, the line from dinosaurs to birds is well accepted, but it doesn't mean the skeletons don't have secrets still to be revealed. Nick Longrich, a PhD student at the University of Calgary, recently uncovered one of these secrets: that Archaeopteryx had flight feathers on its back legs. This changes our picture of how these birds flew, although exactly how the back legs were involved in flight isn't clear. It does suggest, however, that birds probably developed flight coming down from the trees, rather than by jumping into the air.

Here’s the link to the Quirks & Quarks page with an audio link to Nick’s interview, or click HERE to go directly to the MP3 interview.

Visit Nick’s excellent page on Archaeopteryx and his research HERE
Posted by Michael J. Ryan, Ph.D. at 9:42 AM