In a study of island lizards exposed to a new predator, scientists have found that natural selection dramatically changed direction within a single generation, favoring first longer and then shorter hind legs. 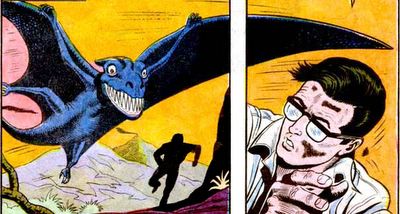 Losos and colleagues studied populations of the lizard Anolis sagrei on minuscule islands in the Bahamas. They introduced a larger, predatory lizard (Leiocephalus carinatus) is six of these islands while keeping six other control islands predator-free. They then counted, marked, and measured lizards on all 12 isles.

Anolis sagrei spends much of its time on the ground, but previous research has shown that when a terrestrial predator is introduced, these lizards take to trees and shrubs, becoming increasingly arboreal over time.

As predicted, six months after the introduction of the predator the surviving Anolis population had longer relative to Alonis on the predator-free islands. After another six months, during which time the Anolis lizards grew increasingly arboreal, selective pressures were exactly the opposite: Survivors were now characterized by having shorter legs on the experimental islands.

The behavioral shift from the ground to higher perches apparently caused this remarkable reversal, Losos says, adding that behavioral flexibility may often drive extremely rapid shifts in evolution.
Posted by Michael J. Ryan, Ph.D. at 9:16 AM