250 million years ago the Earth’s largest mass extinction wiped out 95% of marine species and 70% of land species and fundamentally changed the basic ecology of the world's oceans. 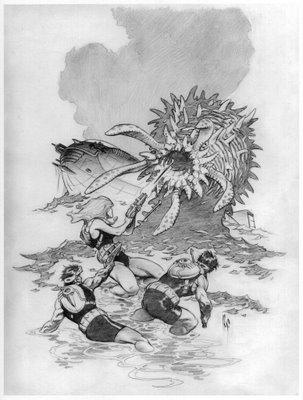 Using data from the new Paleobiology Database in a new quantitative analyses scientists measured changes in the complexity of marine ecology over the Phanerozoic.

"We think these are the first analyses of this type at this large scale”, said Wagner. “They show that the end-Permian mass extinction permanently altered not just taxonomic diversity but also the prevailing marine ecosystem structure."

Specifically, the data and analyses concern models of relative abundance found in fossil communities throughout the Phanerozoic. The ecological implications are striking. Simple marine ecosystems suggest that bottom-dwelling organisms partitioned their resources similarly. Complex marine ecosystems suggest that interactions among different species, as well as a greater variety of ways of life, affected abundance distributions. Prior to the end-Permian mass extinction, both types of marine ecosystems (complex and simple) were equally common. After the mass extinction, however, the complex communities outnumbered the simple communities nearly 3:1.

"If not for this one enormous extinction event at the end of the Permian, then marine ecosystems today might still be like they were 250 million years ago."
Posted by Michael J. Ryan, Ph.D. at 11:30 AM