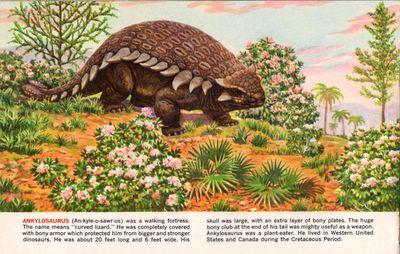 Matt wrote the chapter on Ankylosauria in the latest edition of The Dinosauria. He's thought more about the development of ankylosaur dermal armour than anyone else I know, and this paper should be of interest to anyone curious about dinosaur osteoderms.

Abstract (edit): Among modern mammals, armadillos (Xenarthra, Cingulata) are the only group that possesses osteoderms, bony inclusions within the integument.

Compared with the rest of the skeleton, osteoderms have a delayed onset of development. Skeletogenesis begins as condensations of osteoblasts secreting osteoid, localized within the papillary layer of the dermis.

Osteoderm formation is asynchronous both within each shield and across the body. The first osteoderms to mineralize are situated within the pectoral shield of the carapace, followed by elements within the banded, head, pelvic, and tail shields. In general, within each shield ossification begins craniomedially and proceeds caudally and laterally, except over the head, where the earliest elements form over the frontal and parietal bones.

The absence of cartilage precursors indicates that osteoderms are dermal elements, possibly related to the all-encompassing vertebrate dermal skeleton (exoskeleton). The mode of development of D. novemcinctus osteoderms is unlike that described for squamate osteoderms, which arise via bone metaplasia, and instead is comparable with intramembranously derived elements of the skull.

The image is from the 1964 Sinclair Dinoland booklet which I now have a copy of. I'll be posting the rest of the booklet soon.