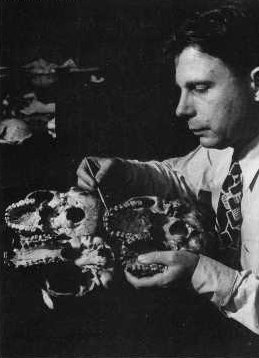 German paleontologist and geologist G.H. Ralph von Koenigswald is best known for his work on early primate ancestors of humans, such as Pithecanthropus, Giganopithicus blacki, and Hemanthropus. He spent most of his career doing fieldwork in Java. He was also associated with the Netherlands Geological Survey and the Carnegie Foundation and taught at the Rijksuniversiteit in Utrecht.

Like many palaeontologists, Koenigswald had an interesting life. Russell L. Ciochon gives this story from HERE:

“The original fossils of Peking man disappeared during the confusion of World War II - fortunately, after they were described and cast by anatomist Franz Weidenreich. The war also caught up with von Koenigswald, who was taken prisoner by the Japanese in Java. His precious collection of Gigantopithecus teeth - at that point, the only known specimens of the fossil ape - spent the war years in a milk bottle buried in a friend's backyard on the island”.