Our old buddy and fellow U Calgary grad makes the news! 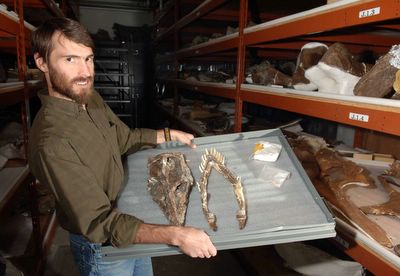 Pat Druckenmiller, in the collection room of MSU's Museum of the Rockies, displays the skull and lower jaw of an ancient sea monster found in central Montana. (MSU photo by Jay Thane).

Ken Olson of Lewistown and his son, Garrett, found the fossils in mid-August about 75 miles northeast of Lewistown. Since Horner was in Mongolia, Olson said he prepared the fossils himself and delivered them to Horner about three weeks later. Olson, a retired Lutheran pastor, has long collected fossils for the museum. Two of his best finds are the large Torosaurus skulls displayed there.

"It's a very important specimen," MSU paleontologist Jack Horner said at the Museum of the Rockies where the fossil rests in boxes. "We have been looking for it for a long, long time."

Believed to be approximately 70 million years old, its skull and lower jaw represent the first complete skull of a long-necked plesiosaur found in Montana, according to Montana State University experts. The skull is said to be one of the best specimens of its kind in North America.

"This critter is one of the long, ridiculously long-necked plesiosaurs," said Pat Druckenmiller, an MSU expert in marine reptile fossils. Druckenmiller, who described a new plesiosaur called Edgarosaurus from southern Montana in 2002, was part of a Norwegian expedition in August that mapped the location of several giant fossils in the Arctic. He is now an adjunct instructor in the Department of Earth Sciences at MSU.

"This is basically the first good elasmosaur (long-necked plesiosaur) skull found in Montana," Druckenmiller said. "That, of course, is really neat. In fact, I would say this is one of the top five skulls of an elasmosaur in North America."
Posted by Michael J. Ryan, Ph.D. at 4:19 PM