Ernst Heinrich August Haeckel
Born 16 Feb 1834; died 9 Aug 1919.
German zoologist and evolutionist was a strong proponent of Darwinism and proposed new notions of the evolutionary descent of man. He coined many words commonly used by biologists today, such as phylum, phylogeny, and ecology. Noted for the book, The evolution of man: a popular exposition of the principal points of human ontogeny and phylogeny,

Jean-Baptiste-Julien d' Omalius d'Halloy
Born 16 Feb 1783; died 15 Jan 1875.
Belgian geologist who was an early proponent of evolution and was acknowledged by Charles Darwin in his preface to ‘On The Origin of the Species’ for his opinions on the origin of new species through descent with modification. He determined the stratigraphy of the Carboniferous and other rocks in Belgium and the Rhine provinces, and also made detailed studies of the Tertiary deposits of the Paris Basin 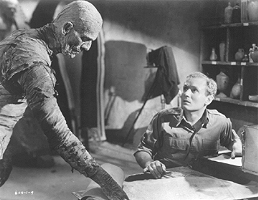 On this day in 1923, archaeologist Howard Carter opened the sealed doorway to the sepulchral chamber of King Tutankhamen's tomb in Thebes, Egypt.

Boris Karloff as The Mummy
Posted by Michael J. Ryan, Ph.D. at 7:06 AM