This week in SCIENCE 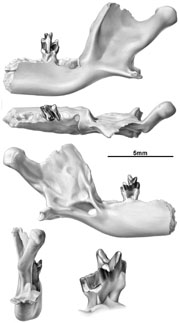 News.Com.Au reports that a 115 million-year-old fossil dentary(lower jaw) of a monotreme was found on Victoria's south-east coast by a team of researchers and volunteers from Monash University and Melbourne Museum in 2002. Teinolophos has a large groove on its dentary which indicates that the smaller bones that would become the middle ear bones of modern mammals had not yet detached (modern mammals have three while birds and reptiles have only one).

Teinolophos lived after monotremes split from the more derived placental and marsupial mammalian groups. Its dentary structure, along with its place in the evolutionary tree, hints that a common ancestor to all these mammals lacked the special three-bone ear structure and that this complex structure evolved twice in two separate mammalian lineages.

Dr. Susan Kidwell of the University of Chicago reports that the 500 million year old record of marine bivalues gives an accurate picture of the pattern of evolution in these animals. Her work did not support the previously expressed opinions that a differential resistance to decay amongst the various types of shells would bias the groups recovered from the fossils record.

"The broad outlines of the bivalve record can be counted on as a reliable picture of evolutionary history," said Kidwell, whose work was supported by a grant from the National Science Foundation.