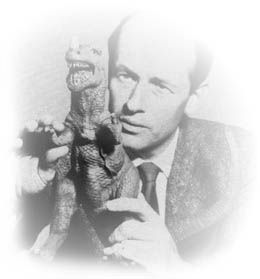 A recent fax from Ray Harryhausen reminded the palaeoblog that Christopher Boyko has named a fossil sand crab from the Oligocene of Italy is his honor. In a paper published in the July issue of Palaeontology Boyko reassigned the material recently described as the fossil albuneid Paralbunea galantensis De Angeli and Marangon to the new genus, Harryhausenia. Boyko was no doubt inspired by the giant crab that Harryhausen animated in his classic film Mysterious Island in 1961.
Posted by Michael J. Ryan, Ph.D. at 8:33 AM