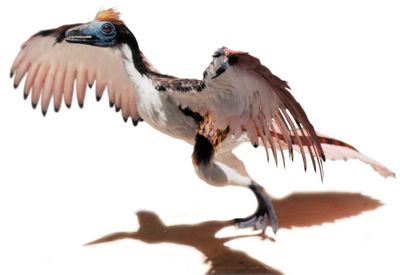 Feathered Dinosaurs: The Bird/Dinosaur Connection Exhibition opens February 25 at the Cleveland Museum of Natural History and runs through May 29, 2005. The largest of the dinosaurs is a huge female Tyrannosaurus rex built by Kokoro Dinosaurs of Woodland Hills, California, who growls as she swings her head and tail back and forth. The 4,500-square-foot exhibition presents the latest findings and investigates the dinosaur/bird evolution through the use of robotic and stationary models, text and graphics.

“From Archaeopteryx, the earliest known bird, to Tyrannosaurus rex, the world’s greatest predator, visitors will learn how and why these two animals are literally ‘birds of a feather,’” explained Dr. Michael Ryan, the Museum’s new curator of Vertebrate Paleontology, who hails from Alberta, Canada. “Most paleontologists now believe that ‘all birds are dinosaurs’ even if ‘not all dinosaurs are birds’. Living birds are the descendants of small, carnivorous dinosaurs.” He said, “Some of the earliest fossils of each of these groups appear in the fossil record at approximately the same time, indicating that the evolution of flight was an important early step for one group of carnivorous dinosaurs. Throughout the next 150 million years, birds took to the skies while their cousins dominated the ground with sharp teeth or beaks, and claws.”

Even earth-bound predatory dinosaurs retained evidence of their shared ancestry with birds. Ryan pointed out, “Some, like Caudipteryx and Sinosauropteryx, have well-developed feathers with elaborate patterning, similar to those seen in many living birds. Others, like Oviraptor, show evidence for brooding eggs on a nest, and even controlling the temperature of these eggs by shading them with her body or drawing a fine layer of sand over them. All of them, even T. rex, have hollow bones, important for reducing weight for flight.”

Ryan added, “Other bird-like behavior, such as nesting, was probably common to most dinosaurs, even plant-eating duck-billed dinosaurs like Maiasaura. This ‘good-mother’ dinosaur was so named because she appears to have carefully tended to the early development of her young as they hatched in her nest.”

To complement this dramatic exhibition, the Museum is planning two dinosaur-related planetarium programs during the exhibition venue, a Dino-Mite Dino Camp-In from March 11, 7 p.m. to March 12, 8 a.m., student and teacher classes, programs for members and the general public, plus a Creature Feature Weekend called Festival of Feathers on Saturday and Sunday, April 16 and 17. 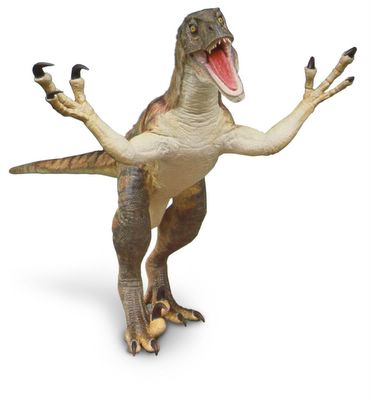 Museum admission fees for the run of this exceptional exhibition are: $9 adults, 18 years and older; $7 ages 5-17, college students with IDs and senior citizens; $6 children 3-6 years of age; free children 2 and under. Group rates (12 or more) are also available. Shafran Planetarium shows are $3 per person with admission fee. Museum members receive free admission to the Museum and planetarium.
Posted by Michael J. Ryan, Ph.D. at 6:45 AM