In honor of the opening of the new feathered dinosaur show at the CMNH the palaeoblog reaches back into the October, 2004 archives to present this news article from BBC News about the oldest known fossil bird embryo with feathers. 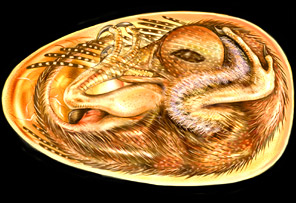 The 121-million-year-old baby arboreal bird was fossilized while still curled in its egg. Researchers know the bird, found in northeast China, was an embryo because the fossil is tucked up in a very characteristic way for an unhatched chick.

"The tucked posture of the fossil is consistent with a late-stage embryo rather than with a hatchling, in which case the head would have raised beyond the vicinity of the feet," said authors Zhonghe Zhou and Fucheng Zhang from the Chinese Academy of Sciences in Beijing, China.

The research was published in: