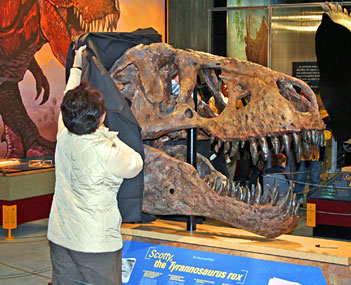 A replica of “Scotty” the T.rex, discovered just outside of Eastend Saskatchewan in 1991 will be heading to Japan for a year long tour. The original bones will also be heading over but will return to Canada from Tokyo in July. The T. rex was disarticulated prior to fossilization and the individual bones had to be painstaking excavated from rock so hard that it regularly bent the tips of pick axes. I had an opportunity to work for a few days in the quarry with Tim Tokaryk from the Royal Saskatchewan Museum and his crew, and broke more than a few tools while digging in the iron-hard matrix.

CORRECTION: The replica skull was assembled by our good friends at PALAIOS in East Coulee Alberta, not the Royal Tyrrell Museum. Be sure to take in the 12th Annual East Coulee Spring Fest on April 9,2005.
Posted by Michael J. Ryan, Ph.D. at 8:45 AM