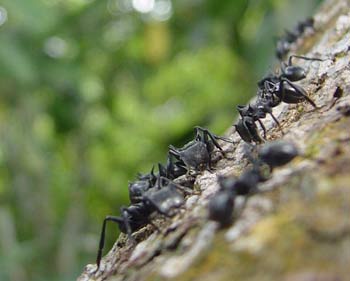 Excerpts from a media release by Robert Sanders, University of California, Berkeley, for an article in the Feb. 10, 2005 issue of Nature.

Stephen P. Yanoviak, Robert Dudley, Michael E. Kaspari report on the discovery of flightless ants in Central and South America that have the ability to glide showing that wingless flight has evolved numerous times throughout the animal kingdom.

By painting the ants' rear legs with white nail polish, [Yanoviak] was able to track their fall and establish that they come in backwards to the tree, hit and hang on, though they often tumble down the trunk a few feet and occasionally bounce off. They can actually make 180 degree turns in midair, however, so even when they fail the first time, they can execute a mid-air hairpin turn and glide in for another try.
"I noticed this five years before in Panama, but it was at that moment in Peru 18 months ago that I realized why they do it: They're trying to get back to the tree, they're trying to not get lost in the understory of the forest," he said. Once they hit the forest floor, he added, they're unlikely to find a chemical trail back to the nest, and most likely will be eaten by predators.

"That's what I think is the major evolutionary driving mechanism behind the behavior," he said. "In Amazon forests, you really don't want to fall out of your tree and in the water, because then you're definitely dead.
All told, Yanoviak has dropped about 60 species of ants from the treetops, and has found some form of gliding — what he and his colleagues call directed aerial descent — in 25 species representing five separate genera. It is the norm in only two groups, however: the Cephalotini tribe, which includes Cephalotes atratus, and the arboreal Pseudomyrmecinae ants.

"Steve's first observation may be leading to a whole Pandora's Box of gliding arthropods," added Kaspari. "Steve, Robert and I right now are exploring how pervasive such directed descent might be — we are, in fact, finding it in a variety of wingless arthropods that glide in using a variety of techniques. Plummeting to the earth may be the exception, not the rule."

For a four minute streaming REAL video of gliding ants click here.
Posted by Michael J. Ryan, Ph.D. at 8:58 AM