In an article on January 23, 2005, Roger Ebert of the Chicago Sun Times in his Answer Man column responds to a writer’s question about films recycling sounds and stock footage from older movies. He notes that in Citizen Kane,

“… when Kane and Susan take their guests on a picnic, … a band plays, and in the background, between trees, if we look closely we can see pterodactyls, the prehistoric flying dinosaurs. The back-projection footage for these shots was borrowed from "Son of Kong" (1933).”

So, dinosaur film buffs now have one more movie to add to their “must see” list. 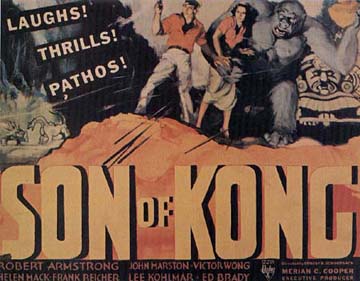 And, I’m sure many people pointed out to Roger that pterodactyls are not dinosaurs.
Posted by Michael J. Ryan, Ph.D. at 8:11 AM