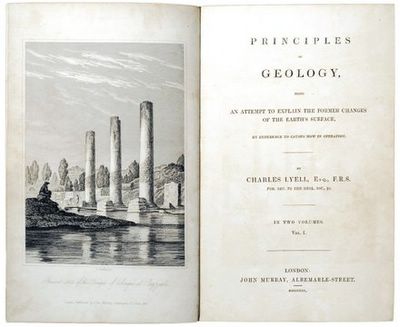 From Dr. Paul E.Olsen's Dinosaurs and the History of Life Course:

Sir Charles Lyell's monumental book, "Principles of Geology, being an attempt to explain the former changes of the Earth's surface by reference to causes now in operation", was published in 1830. The frontispiece (above) shows the temple of Serapis at Puzzuoili, Italy as it appeared in the early 19th century. The pillars are covered by several generations of marine animal encrustations (visible as different bands) showing that since its construction there had to be multiple episodes of vertical movement at the scale of several meters, alternately submerging and exposing the pillars to different levels.

Lyell argued that the natural processes (e.g., sediment deposition and erosion)occurring today logically also happened in the geologic past, that geological change is slow and steady, rather than quick and sudden, and that the natural laws are constant and eternal, operating at about the same intensity in the past as they do today.

Lyell's "Principles" was influental in helping Darwin formulate his theory of evolution through natural selection. Darwin is quoted saying, "The greatest merit of the Principles was that it altered the whole tone of one's mind, and therefore that, when seeing a thing never seen by Lyell, one yet saw it through his eyes."
Posted by Michael J. Ryan, Ph.D. at 8:43 AM