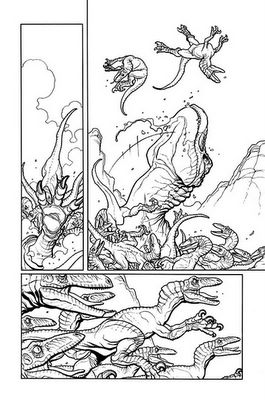 Maryland artist Frank Cho made a name for himself drawing his own syndicated newspaper strip, Liberty Meadows, in the late 1990's. Cho often let his Krenkelian penmanship take over the strip whenever characters like King Kong (the original 1933 version, thank you very much) would stumble through battling a T. rex in an unannounced cameo. After he retired that strip from syndication (but it's still being published in comic book-style collections) he began drawing for the legendary Marvel Comics. In January Marvel published the first of a six-issue series featuring Cho's version of the character, Shanna the She-Devil. Originally a generic 'Jungle Girl', Frank has 'reimagined' Shanna and placed her in a world of non-stop Jurassic Park-style dinosaur action.

Palaeoblog recommends the book for Cho's beautiful depiction of dinosaurs, but warns the reader that the lead character does take her fashion sense from the heroines of old films like When Dinosaurs Ruled the Earth. While there is no nudity in the book, poor Shanna does come very close to losing what little she does wear at least once an issue.

For an interview with Frank Cho grab a vine and swing on over to SBC Interviews.
Posted by Michael J. Ryan, Ph.D. at 7:30 AM