The Cambrian Web of Life

The ecology of Cambrian communities was remarkably modern, with networks of feeding relationships among marine species that lived hundreds of millions of years ago being remarkably similar to those of today. 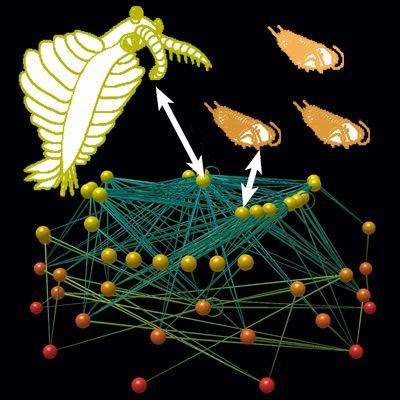 The food web of the Burgess Shale from the Middle Cambrian; spheres represent species or groups of species, and the links between them show feeding relationships. The drawing shows a top predator, Anomalocaris, chasing one of its likely prey species, the trilobite Olenoides, with arrows indicating their positions in the food web. Image: N. D. Martinez

The researchers compiled data from the 505 million-year-old Burgess Shale in British Columbia, Canada and the even earlier Chengjiang Shale of eastern Yunnan Province, China, dating from 520 million years ago. Both fossil-rich assemblages are unusual because they have exquisitely preserved soft-body parts for a wide range of species. They determined who was eating whom by piecing together a variety of clues. There was the occasional smoking gun, such as fossilized gut contents in the carnivorous, cannibalistic priapulid worm Ottoia prolifica. However, in most cases, feeding interactions were inferred from where species lived and what body parts they had. For example, grasping claws, swimming lobes, big eyes, and toothy mouthparts suggest that Anomalocaris canadensis, a large, unusual organism with no modern descendents, was a formidable predator of trilobites and other arthropods, consistent with bite marks found on some fossils.

The Cambrian food webs share many similarities with modern webs, such as how many species are expected to be omnivores or cannibals, and the distribution of how many types of prey each species has. Such regularities, and any differences, become apparent only when variation in the number of species and links among webs is accounted for. "There are a few intriguing differences with modern webs, particularly in the earlier Chengjiang Shale web. However, in general, it doesn't seem to matter what species, or environment, or evolutionary history you've got, you see many of the same sorts of food-web patterns," explains Dunne.
Posted by Michael J. Ryan, Ph.D. at 9:47 AM