Buffon was a French naturalist, who formulated a crude theory of evolution and was the first to suggest that the earth might 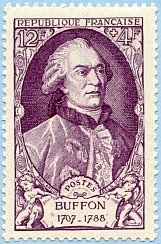 More info on Buffon from UC-Berkeley.
Stamp from HERE.
Posted by Michael J. Ryan, Ph.D. at 10:11 AM