More Resolution for The Tree of Life

The article I reported on HERE is now in print:

Abstract: Long-held ideas regarding the evolutionary relationships among animals have recently been upended by sometimes controversial hypotheses based largely on insights from molecular data. These new hypotheses include a clade of moulting animals (Ecdysozoa) and the close relationship of the lophophorates to molluscs and annelids (Lophotrochozoa). 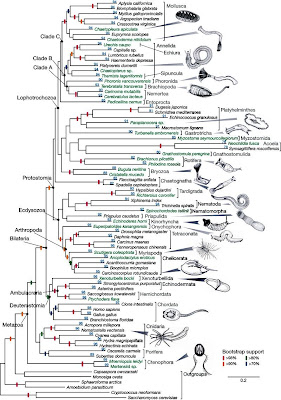 The figured topology and branch lengths are for the sampled tree with the highest likelihood (1,000 searches, log likelihood = –796,399.2). Support values are derived from 1,000 bootstrap replicates. Leaf stabilities are shown in blue above each branch. Taxa for which we collected new data are shown in green.

Many relationships remain disputed, including those that are required to polarize key features of character evolution, and support for deep nodes is often low. Phylogenomic approaches, which use data from many genes, have shown promise for resolving deep animal relationships, but are hindered by a lack of data from many important groups.

Here we report a total of 39.9 Mb of expressed sequence tags from 29 animals belonging to 21 phyla, including 11 phyla previously lacking genomic or expressed-sequence-tag data. Analysed in combination with existing sequences, our data reinforce several previously identified clades that split deeply in the animal tree (including Protostomia, Ecdysozoa and Lophotrochozoa), unambiguously resolve multiple long-standing issues for which there was strong conflicting support in earlier studies with less data (such as velvet worms rather than tardigrades as the sister group of arthropods), and provide molecular support for the monophyly of molluscs, a group long recognized by morphologists.

In addition, we find strong support for several new hypotheses. These include a clade that unites annelids (including sipunculans and echiurans) with nemerteans, phoronids and brachiopods, molluscs as sister to that assemblage, and the placement of ctenophores as the earliest diverging extant multicellular animals. 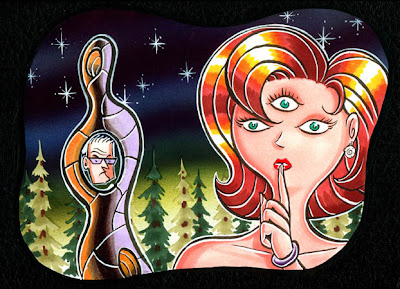 We came from where...? Art © Tom Bagley.
A single origin of spiral cleavage (with subsequent losses) is inferred from well-supported nodes. Many relationships between a stable subset of taxa find strong support, and a diminishing number of lineages remain recalcitrant to placement on the tree.
Posted by Michael J. Ryan, Ph.D. at 1:33 PM