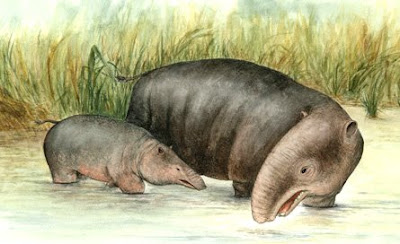 A new study of Moeritherium teeth suggests that it was semi-aquatic, eating freshwater plants and dwelling in swamps or river systems.

Moeritherium lived some 37 million years ago, many millions of years after the genetic lineages of elephants and sirenians split. Moeritherium didn't much resemble modern elephants. It was probably about the size of a tapir—74 to 107 cm tall --at the shoulder. It seems to have lacked a trunk but may have had a prehensile upper lip.
Posted by Michael J. Ryan, Ph.D. at 10:44 AM