Sloane was a British physician and naturalist whose collection of books, 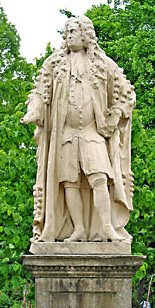 manuscripts, and curiosities formed the basis for the British Museum in London. By the time he died, Sloane had amassed one of the world's largest and most varied collections of natural history specimens. His passion for the collection and his concern for its future upkeep after his death led him to write a will which clearly stated that it must "remain together and not be separated."

He offered it to the British nation, requesting in return a sum of £20,000 for his heirs. Parliament accepted, and King George II gave his royal assent 7 Jun 1753. Thus the British Museum was created and eventually its sister institution, the British Museum of Natural History. image